If you haven't already heard of Brice Bischoff, let me introduce you to his work.

Brice Bischoff is a Los Angeles based Artist and the Bronson Caves are also located in Los Angeles. Brice used the caves to create his latest pieces of work, which involved long exposures and colored paper. The papers were draped over Brice and he would move about for a period of time, creating these breathtaking and visually pleasing photographs. The Bronson Caves have been used as a location for a heap of movies + television shows, the likes of Star Trek and Scorpion King were both filmed at this location. I just adore this series..... Technicolor Ghosts emerging from a cave. Stunning. 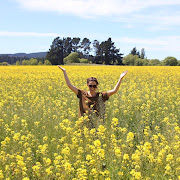 Welcome my little corner of the internet. A place where I ramble on a little. A.x

Let's go back a little: